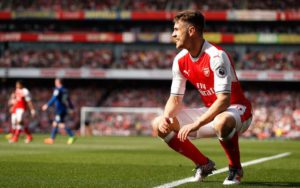 Arsenal recovered from their horrific loss last weekend, with a 2-0 win against Man U to put them back in the hunt for a top four spot.

Although it has been a game that has historically been full of blood and thunder, the first-half was an incredibly poor and low-quality game of football. Man U obviously came to do a defensive job and nick a goal on the break while Arsenal still seemed shell-shocked from last week’s debacle.

The Gunners, however, got off the mark first via a Xhaka deflected shot and then quickly followed that up with a second. With two goals in the bag, Arsenal took the valuable three points, thanks especially to Aaron Ramsey who put in one of his best performances of the season.

I'm usually harsh on ramsey but today he was brilliant

Ramsey was good today, his runs into the box and movement was quality

Everyone had issues with xhaka Ramsey pivot today,but I think it's safe to say Ramsey ran the show man was unplayable today