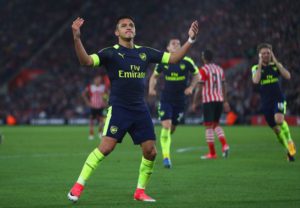 Arsene Wenger has hailed Alexis Sanchez as a complete player and “special player” ahead of Tuesday’s clash against Sunderland.

The Chile international faces a fitness test ahead of Tuesday’s game but has been praised by his manager for his superb season. Although Sanchez’s future had remained in doubt for most of the season, amidst all the speculation he has still managed to register 21 goals and 10 assists in the league this season – the tenth player to achieve such a feat.

Alexis has been linked with a number of clubs and Wenger believes he is a more complete player than the one that joined the club in 2014.

“I think overall at the start he was, as a player, mainly focused on scoring goals and he developed his assist potential with us very well.”

“He plays now in a position where he can provide as well as score. I believe he has become a complete player and developed very well here at Arsenal.

“It’s an exceptional achievement to score and provide in double figures. That is to be a special player.”