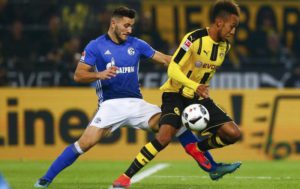 After a month of speculation, reports have emerged that Saed Kolasinac will join Arsenal once his contract with Schalke expires on 30 June, according to Sky sources.

The Bosnian international has long been linked with a move to the Gunners having refused to sign a new deal with Schalke 04. Reports had broken last night that he had indeed signed a five-year deal with the club following a successful medical.

The news has been received positively by Arsenal fans who have raved about the apparent new signing, so here are some of the best tweets from the fans.