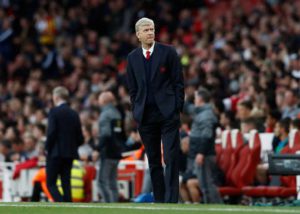 Earlier this week the Frenchman implied that some teams were practically giving up in their last few games. Following West Ham’s 4-0 loss to Liverpool – Arsenal’s top-four rival – Wenger insisted that “some teams turn up, some go on holiday”, Moyes, however, did not take kindly to Wenger’s insinuation.

“I think that’s an insult to football as I’ve been a player myself. I would hate it if anyone would question me if I was going to chuck a game away.”