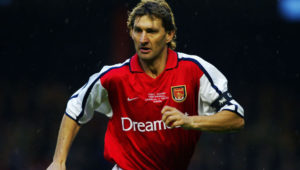 Wenger has long been criticised for not bringing back enough ex-Arsenal players, the fans have constantly chastised the Frenchman for his apparent insistence on having absolute power at the club. Tony Adams, however, has now come out to criticise the club and Wenger for not allowing him back at the club.

Adams revealed that the club and Wenger had blocked him from coming back to the club four times. Adams, however, did reveal that he returned to the club to coach the under-18s before he left for a more economically beneficial move to Chinese Super League team, Chongqing Lifan.

It safe to say there was a mixed reaction from the Twitterverse.

Love Tony Adams, absolute legend – but tough to take his comments seriously when he turned down the opportunity to be U18s coach last year.

Tony Adams' comments about AW are totally absurd. Yeah, AW isn't the perfect coach but without him Adams wouldn't be where he's today.

If you're directing abuse & hate at Tony Adams for having an opinion about Arsene Wenger that you dislike, you need to seriously deactivate.

Love Tony Adams, but he was given a role on the coaching staff and left to go to somewhere else, so his point isn't valid.