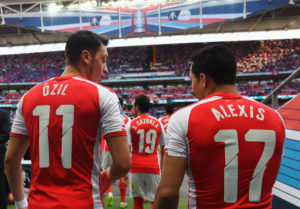 In an interview with beIN Sports, Arsene Wenger has insisted that neither Alexis sanchez nor Mesut Ozil will be sold this summer.

Both players are entering the final 12 months of their respective contracts. The future’s of both players has been the point of high speculation over the last 12 months, with Sanchez, in particular, being linked with a move away from the club. Wenger, however, remains steadfast in his opinion that both players will remain at the club this summer.

Reports have heavily linked Alexis Sanchez with a move to Man City or Bayern Munich in recent weeks but it seems the priority for Wenger to keep both players and try to sign them to new contracts.