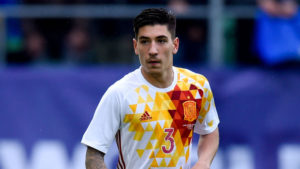 Following an interview with Mundo Deportivo, reports have emerged in Spain, that Hector Bellerin has agreed personal terms with Barcelona ahead of a possible return to Catalonia.

Bellerin has been continuously linked with a move away from the club, with both Manchester City and Barcelona heavily linked with him last summer. The Spaniard, however, signed a new long-term contract with Arsenal to end speculation linking him with a move to Man City but still remained a top target for Barcelona.

Both Spanish news outlets, Sport and RAC1 have now concluded that Bellerin has agreed to move to Barcelona and will discuss the potential with Arsene Wenger, with an official bid from the Catalan club possibly coming as early this week.