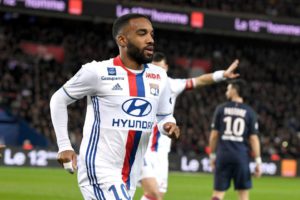 Jean-Michel Aulas has confirmed that Arsenal have submitted a bid for Lacazette but Lyon remain confident will not leave the club.

The Lyon striker who scored 28 league goals last season was close to a move to Atletico Madrid before the Spanish club’s transfer ban was upheld, thus leaving Arsenal as one of the leading suitors for his signature.

The French club had initially been willing to allow Lacazette to leave the club but a change in stance on the player could threaten the Gunners’ move for the forward, according to Aulas.

“Alexandre Lacazette was told he could leave. We had negotiations with Atletico. Things did not work out. We now have a very nice offer from Arsenal. But for us he will not leave.”