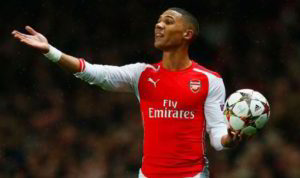 Arsenal have placed a £8 million price tag on defender, Kieran Gibbs according to the Mirror.

With the arrival of new signing, Sead Kolasinac, Gibbs’ long-term future has become unclear. Moreover, at 27, with only 12 months remaining on his contract and playing back up to Nacho Monreal, it seems Kibbs’ career is coming to an end at the Emirates.

It is understood that Arsene Wenger is willing to allow Gibbs to leave, although the player himself is reportedly demanding a £70,000-a-week deal.

Newcastle are the frontrunners for Gibbs, although West Brom have also shown an interest in signing the left-back.