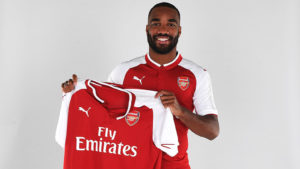 Arsenal have announced their second signing of the transfer window, Alexandre Lacazette.

As per reports this morning, Arsenal announced the striker at 17:00 to comply with the French stock market, for a fee of €53 million which could rise to €60 million with add-ons.

It is thought that the player will sign a five-year deal worth £200,00-a-week to become Arsenal’s highest earner at the club, surpassing Mesut Ozil and Alexis Sanchez.

Lacazette will join up with the squad on their pre-season tour of Australia and China and will likely make his debut later this month in the Emirates Cup.