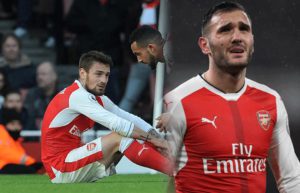 Arsenal FC will be forced to offload some of its players this week. The news comes after the acquisition of Alexandre Lacazette who takes the club’s tally of Non-Homegrown players to 17.

As reported by the Mirror, Arsenal will allow Lucas Perez and Mathieu Debuchy to leave the club. Perez has had a frustrating season at the club and is likely to return to Deportivo La Coruna, while Debuchy will miss Arsenal’s pre-season tour in order to facilitate a transfer away from the club. Deubuchy may even be allowed to leave on a free transfer, a year before his contract runs out.

Fans should not worry, however as Arsene Wenger is not yet done with the transfer business after fully shifting his attention to Riyad Mahrez and Thomas Lemar.