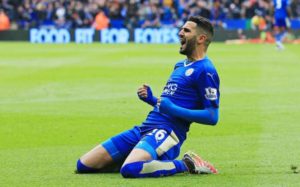 Leicester City have slapped a mammoth £50 million price tag on midfielder, Riyad Mahrez to fend off interest from Arsenal.

The Express report that Arsene Wenger is unwilling to pay such a huge sum of money for the 26-year-old Algerian, although Mahrez has reportedly handed in a transfer request. The Gunners are willing to pay £35 million for the winger who had slightly average season following his superb title-winning year with Leicester City.

Arsene Wenger is an admirer of the player but the latest development indicates that he will look at his other transfer targets in the form of Thomas Lemar or Juan Cuadrado to bolster his attacking options.

Arsenal broke their transfer record with the signing of Alexandre Lacazette but are not shutting up shop for business just yet. With Sanchez’s future at the club looking increasingly uncertain, Wenger is ready to once again splash the cash on another forward and maybe even a central midfielder.