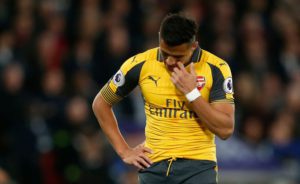 As is well known, Alexis Sanchez has one year left on his deal and according to the Independent, the club will not let Sanchez leave this summer amid strong interest from Manchester City.

Arsene Wenger will not sell this summer, which has led to some close to Sanchez concluding that the Chilean will stay at Arsenal for another year. The club have offered the Chilean double what he currently earns with some even reporting that the fee offered is £300,000-a-week. Sanchez, however, has refused to sign a new deal with club and has reportedly held talks with Pep Guardiola over a move to Manchester City.

Both parties are unwilling to move on their respective stances: Arsenal will not sell Sanchez to a rival, while Sanchez will not sign a new deal. Bayern Munich had thought to have been in strong contention to sign the Chilean but were priced out.

With Bayern Munich out of the race, Arsenal are not exactly keen on selling to a rival, hence the mega £90 million asking price.