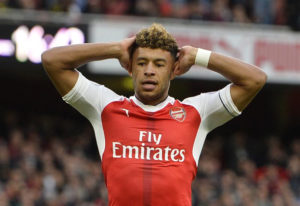 Arsenal midfielder, Alex Oxlade-Chamberlain will likely leave the summer according to Sky News.

Oxlade-Chamberlain is one of the multiple players whose contract will expire next summer. The England international has been in negotiations with the club over a new year deal but according to Sky, both parties are no closer to an agreement.

Arsenal want to keep Oxlade-Chamberlain but we're told "chances of him signing new deal are virtually nil". No new talks planned at present

Following his switch to RWB, Oxlade-Chamberlain became one of Arsenal’s more consistent performers in the latter stages of the season. Arsene Wenger wants to keep the 23-year-old, with Wenger even concluding this morning that he expects all players under contract, to honour their deal with the club.

Much like Sanchez, it remains to be seen if Oxlade-Chamberlain will remain at the club this year or leave – Liverpool have been heavily linked.