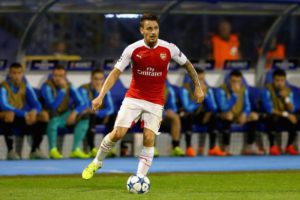 Mathieu Debuchy is reportedly set to arrive in the south of France in the next 48 hours for a medical with Nice, ahead of his transfer from Arsenal.

The right-back is set to be one of a host of squad players to depart the club this summer, along with Wojciech Szczesny, Calum Chambers and Kieran Gibbs. According to RMC journalist, Tristan Molineri, the 31-year-old defender will move to the French club as he is desperate for game time.

Debuchy has two years left on his current deal but after becoming dissatisfied with his his position at the club, he was always likely to leave. Debuchy only made four appearances for the club last season, following a loan spell with Bordeaux the preceding year and has found himself a bit part player since the emergence of Hector Bellerin.