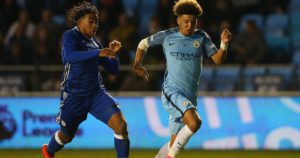 The 17-year-old is one of the brightest talents in City’s academy but it is thought to be doubting whether he has a clear path to the first-team. With City’s litany 0f stars, especially in the forward positions, it seems understandable that the youngster is considering a move away.

The England under-17 international – who shone at the recent under-17 European Championships – has been offered a three-year deal worth £35,000-a-week to stay at the club but has still not signed the deal.

Arsenal will face competition from Tottenham for his signature but even so, many Arsenal fans are ecstatic as the chance of signing him.

I'd absolutely love us to go in for Jadon Sancho – standout player at #U17Euro. Quite similar to Reiss Nelson in terms of style and stature.

#Arsenal are on the verge of signing highly rated #ManCity youngster Jadon #Sancho – close to agreeing a 5 year deal. Great signing for #AFC

Jadon Sancho is a baller. Better than Reiss in my opinion #afc ,#arsenal

If there is a god we'll sign Jadon Sancho…amazing prospect