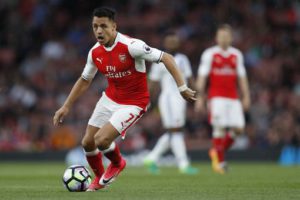 The Chilean international returned to training last week, following an extended summer break but is suffering from an abdominal strain.

“Sanchez will not be available. He had a little abdominal strain that he caught on Sunday morning in training.”

Amid speculation that Sanchez will not sign a new deal with the club, it is becoming quite likely that Arsenal’s star forward is preparing to see out the final year of his contract.

Wenger could also be without Aaron Ramsey and Mesut Ozil, while Laurent Koscielny will miss the game following his red card against Everton in the final game of the season last year.