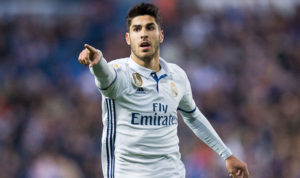 In what could be one of the surprise signings of the summer, Spanish news outlet, Diario Gol, is reporting that Arsenal could make move for Marco Asensio.

The 21-year-old sensation had a superb season with Real Madrid last year but it is understood that the Spanish under-21 international is locked in a contract dispute with the La Liga champions. According to the report, Asensio has a £72 million release clause in his current contract and has also attracted interest from Manchester City and Barcelona.

Asensio feels like he should be given improved terms following his performances since he joined Madrid and is also keen to have more game time. This could well be a tactic by his agent but if the release clause is correct, Arsenal may well look to Asensio with the Lemar deal looking increasingly unlikely.