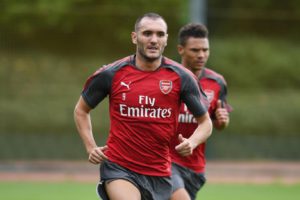 Deportivo La Coruna have made a £10.9 million bid for wantaway forward, Lucas Perez as reported by Sky Sports’ Bryan Swanson.

Perez and his agent, Rodrigo Fernandez Lovelle have made it clear since the turn of the year that the player is not happy at Arsenal and is eager to return to Spain, namely to his previous club, Deportivo La Coruna.

The Spanish striker only managed 11 appearances in the Premier League last season and with the arrival of Alexandre Lacazette – who also took Perez’s shirt number – he seems set to leave Arsenal this summer. Indeed, Fernandez Lovelle spoke to La Voz de Galicia recently that he hoped a deal can be concluded in the near future.

“The offer of Deportivo of €12m very much fits with the current market. Arsenal were the first to show they don’t count on the player, because they removed the shirt without consulting him. As the market is, and considering that they are the first to have devalued him, I think that €12m is a very good offer.”