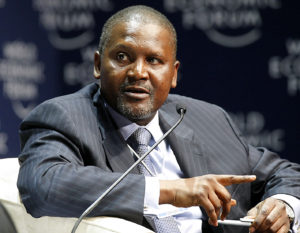 Africa’s richest man, Aliko Dangote, has publicly claimed that Arsene Wenger’s long reign at Arsenal would be over if his long-promised takeover comes to fruition.

“The first thing I would change is the coach. He has done a good job, but someone else should also try his luck.”

Currently, Arsene Wenger has the utmost confidence of the board and a commanding hold over proceedings at the club. However, there is a massive difference of opinion among the Gunners faithful regarding the Frenchman’s ability to deliver top quality silverware, especially after his side failed to qualify for the Champions’ League for the first time ever.

Dangote’s plan may be  little hard to realise, though, as Stan Kroenke remains a self-proclaimed “committed, long-term investor” at Arsenal. However, the multi-billionaire believes that he may get his way if the Arsenal hierarchy “get the right offer”.

“They will not hold ­Arsenal forever. Someone will give them an offer that will make them seriously consider walking away. And when we finish the refinery, I think we will be in a position to do that.”