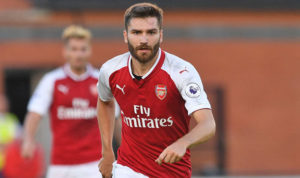 Arsenal midfielder, Jon Toral, has completed his £3 million move to Hull City on a three-year deal.

News broke on Monday that Hull City were in advanced talks with Arsenal ahead of his permanent move to the Championship club. Toral is the ninth arrival at Hull City this summer and yet another youngster to leave Arsenal.

? | We are delighted to confirm the signing of Jon Toral from @Arsenal #WelcomeJon pic.twitter.com/3SbaPGrWec

Toral joined Arsenal in 2011 with Hector Bellerin but has struggled to progress up the ranks at Arsenal, unlike Bellerin. The Spaniard never really got close to breaking into Arsenal’s first-team, having spent the past three seasons on loan at Brentford, Granada, Birmingham City, and Rangers. Toral shone at both Brentford and Birmingham City, winning the players’ and fans’ ‘Player of the Year’ at the latter.