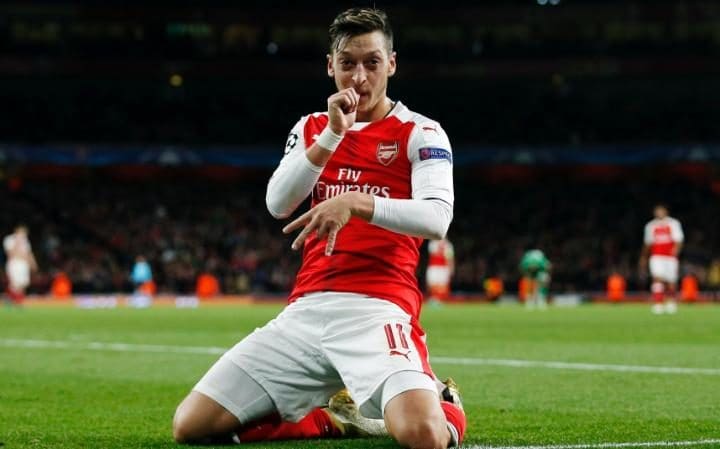 Arsenal new boy Henrikh Mkhitaryan is one of the modern game’s most inventive midfielders with the ball at his feet, however the Armenian ace believes that Mesut Ozil is ‘the best’ No.10 the planet has to offer, despite the former Manchester United man registering 1 more assist than the German metronome in the Premier League this term.

Although the Gunners haven’t necessarily been firing on all cylinders recently, Mkhitaryan is surrounded by a staggering array of creative craftsmen, and the 29-year-old – speaking to Arsenal Player –  insists that playing alongside Ozil is a ‘joy’ to behold, due to the Gelsenkirchen-born composer’s artistry and composure.

“Everyone knows that Mesut is one of the best players in the world.” He boldly claimed.

“It’s only happiness and joy to play next to him because he understands very well the football game, he has great vision, he has amazing technique and he’s the best in his position.”

Arsenal spent wisely in the January transfer window and the club’s decision to splash out on Pierre-Emerick Aubameyang for a club-record fee is nothing more than a seriously intelligent piece of business, as Mkhitaryan and the Gabonese hit-man formed such a potent, telepathic relationship during their respective stints at Bundesliga outfit Borussia Dortmund.

The north-Londoners’ revered No.7 then proceeded to laud ‘Auba’s’ qualities: “I know him very well, he is one of my best friends and one of the best team-mates I have ever had.” He added.

“I am very happy to have him here and I think all the fans are happy to see him in an Arsenal shirt. What can I say? I love playing with him.”

Aubameyang won’t be short of ammunition with ‘Micki’ sat behind him, however with Ozil also at his service, Arsene Wenger’s stuttering fold are sure to pick up the points as once the squad’s latest recruits gel and solidify as an offensive unit, danger will become an unrelenting feature of their approach and strategy in the final third.