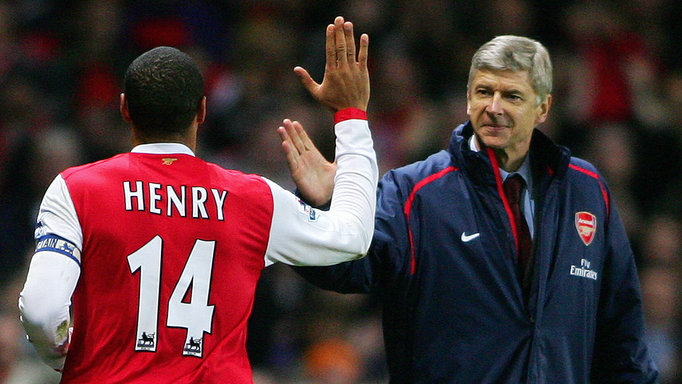 Arsene Wenger’s managerial status at Arsenal has been thrown into disrepute after a damning string of losses in Europe and domestic competitions, and club legend Thierry Henry, who has been touted amongst an illustrious list of possible suitors to replace the under-fire French tactician in the summer, insists that he would always ‘say yes’, if the Gunners were to come knocking for his guidance and strategical services.

Following a tepid 2-1 defeat against Brighton & Hove Albion at the Amex on Sunday in the Premier League, a large, irked majority of the club’s avid fans have called for Wenger’s head to roll and Henry, who is still a great admirer of ‘Le Prof’, would not ‘back down’ from a potential opportunity to succeed his former boss in the dugout at the Emirates.

‘Titi’ is currently Roberto Martinez’s understudy in the Belgium national set-up, and when quizzed to whether he would fill the managerial void at Arsenal if Wenger was to depart, the decorated attacking genius revealed to Sky Sports, via a report published by BT Sport:

“Listen, I’m a competitor, you don’t back down from a challenge.

“We are hypothetically speaking before people jump ahead of everything, [but] I have never backed down from a challenge since I was young.

“If I had listened to people who were talking about where I was going to be, I would not have been here.

“When I arrived at Arsenal, they said to me, ‘Why are you outside of the box, you will never score goals?’ with my position being on the left or whatever it was. You don’t back down from a challenge, you always think that you can.

“When I came back to play for Arsenal, everybody, all my friends were saying, ‘It can only tarnish your legacy, why are you going back there?’.

“If you love a place and they ask – I repeat, they ask – for help, you are always going to say yes. What I am saying to you is again, we are talking about hypothetical thoughts.”

Under Wenger’s esteemed command, Henry won two Premier League titles, three FA Cups and also laid claim to four Golden Boots, and given the former France international’s personal success at Highbury predominantly, the calculated coach and pundit believes that Wenger should ultimately decide upon his immediate future, as he would ‘never’ demand that he steps down from his distinguished position.

“What I don’t want to see is what’s happening to him, and I would like him to have the last word, whatever word it’s going to be.”