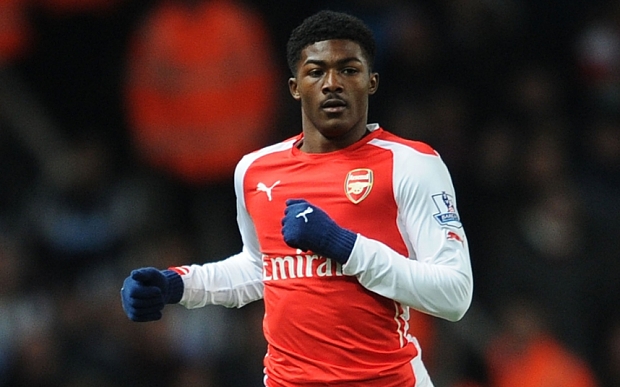 Fellaini’s stooping header made the score 2-1 at the death and ensured that the 3 points went home with Jose Mourinho’s rallied men, whilst condemning Arsenal to a sixth Premier League defeat in as many games, three of which coming against somewhat lesser opposition in AFC Bournemouth, Swansea City and Brighton & Hove Albion.

With the second leg of the Europa League semi-final against Atletico Madrid looming, Wenger opted to field a youthful outfit, with Reiss Nelson and Calum Chambers being handed starts alongside Maitland-Niles, as well as a debut outing for 20-year-old centre-back Konstantinos Mavropanos.

Ex-Red Devil Henrikh Mkhitaryan slotted the visitors level after Paul Pogba opened the scoring in the first-half, but with an inexperienced Arsenal pinned in their own penalty area for the last 10 minutes, the towering Belgian’s arcing effort ultimately spoiled ‘Le Prof’s’ swansong at the Theatre of Dreams.

Having fought tooth and nail throughout the encounter, Maitland-Niles shares the same deflated feeling as the following ‘Gooners’ who were in attendance, and though a defeat in such dire circumstances is certainly a bitter pill to swallow, the 20-year-old thoroughly enjoyed an accomplished 90 minutes on the field, which would undoubtedly instil an air of confidence in the fledgling starlet as he develops his personal game in the centre of the park.

“It is so unfortunate to fight so hard and then to go down so late in the game,” Maitland-Niles said to the media (via Evening Standard).

“Words can’t describe how we feel right now and apologies to the fans to let them down late on.

“I love playing centre midfield and to do that for Arsenal at Manchester United in the Premier League is a dream come true.

“I guess it was a bit nerve-racking for the lads without a full squad, but we knew we had to give the manager a proper send-off and do our best.”

Used as an auxiliary right wing-back in previous fixtures, Maitland-Niles expertly exhibited his natural adeptness on the ball in the midfield against United, with 92% of his passes managing to reach its intended target, a ratio which any seasoned professional would be proud of registering.

The flourishing midfielder was driven to disrupt and sculpt play both defensively and offensively, and his desire, willingness and capability to pressurise ultimately enabled he and his teammates to wrench the ball off their unsuspecting opponents.

“I’m happy playing in midfield and the boss trusts in me there,” the ‘Young Lion’ added. “I guess I delivered.

“He’s like a father figure. He tells you where to improve and gives you a lot of confidence to go and play your game. It’s brilliant having a manager like that.

“He’s been like that for most of the young boys that have played this season. I thank him very much.”