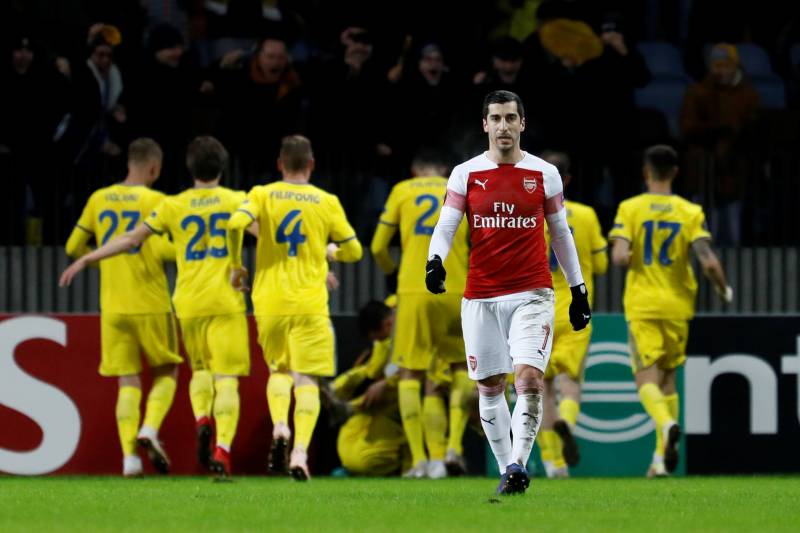 Arsenal’s Petr Cech has pointed the finger at the club’s strikers for their timid 1-0 Europa League defeat against BATE Borisov, a last-32 encounter where the Gunners severely misfired in front of the target at the Borisov Arena.

Falling to a first leg loss in Minsk, Belarus, is not a damning result as there’s still a second leg at the Emirates to contest on February 21st, but it was undoubtedly one of the north-Londoners flattest performances under Unai Emery, especially in the offensive department.

Henrikh Mkhitaryan spurned a simple opportunity in the early stages to break the deadlock and Alexandre Lacazette – who was sent off in the 85th minute for elbowing Aleksandar Filipović – also failed to divert a routine header before his dismissal.

Cech, 36, insists that those in the final third weren’t their usual ruthless selves, and if the squad as a collective are going to progress to the competition’s last-16, they’ll have to flex their superiority in just under a week’s time.

Following Arsenal’s disconcerting loss on the continent, Cech expressed to the media (via Metro):

“Yesterday it was one of those games where if we played for another couple of hours probably we wouldn’t have scored,

“But there are games in football like that. You try, you play, the goal does not arrive and you have to go home with the result you don’t want but you have to pick yourself up and be ready for the second leg.

“This is the advantage of playing two-legged ties – when one game goes wrong you can always make up for it.

“We wanted to score goals and win to put ourselves in a good position. We’ve left it more tricky for ourselves and we need to win at home”