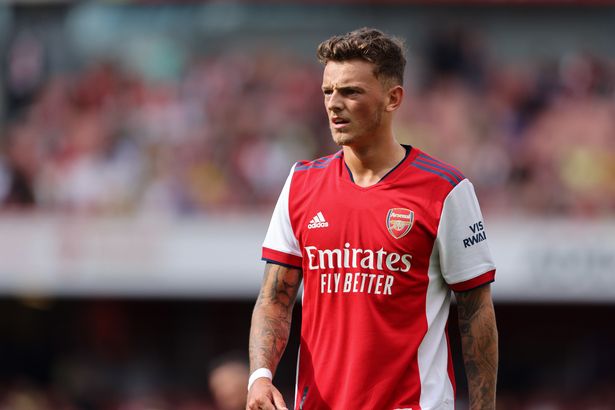 The Gunners suffered a triple fitness blow ahead of the Anfield trip with Martin Odegaard, Emile Smith Rowe and Takehiro Tomiyasu being unavailable for selection.

Things went from bad to worse in the 24th minute as Granit Xhaka was handed a straight red card after kicking Diogo Jota on the chest as he was through on goal.

The Reds had an excellent chance to finish off the League Cup semi-final tie with a commanding first leg lead, but the Gunners displayed a brilliant defensive resolve.

The entire backline was tremendous with their judgement, barring one moment. Calum Chambers, who was making his first appearance in months, was sublime at right-back.

White was equally exceptional with his decision-making. The England international was on guard to make amends for any unforced errors from his teammates.

There were no surprises that he was adjudged man of the match. The centre-back has certainly answered several critics, who questioned the £50m transfer fee paid.

The Gunners have no time to ponder over the result with a crucial Premier League derby at Tottenham Hotspur on Sunday. It remains to be seen whether the game goes ahead.

With injuries, coronavirus cases and absence of key players due to African Cup of Nations, the club are currently very short in options ahead of the north London derby.

Cedric Soares was substituted with an injury last night while Bukayo Saka also suffered a minor concern. Any further setback could pave the way for a postponement.

As things stand, the Gunners is scheduled to go on. Odegaard appears certain to miss the derby due to Covid-19, but Smith Rowe and Tomiyasu could return after injuries.