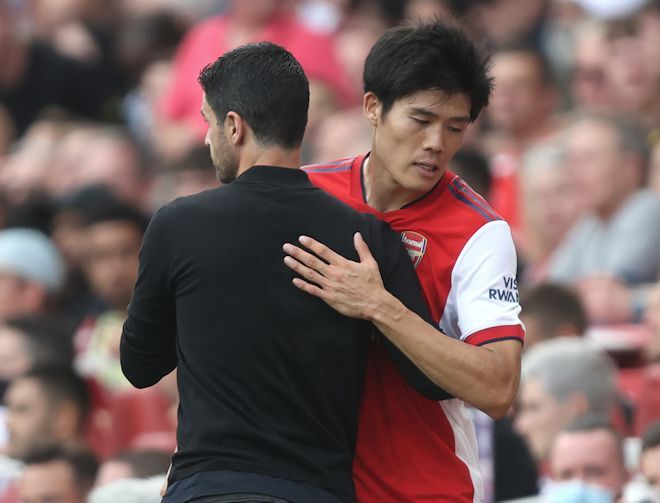 Arsenal manager Mikel Arteta was impressed with the performance of defender Takehiro Tomiyasu despite the club’s defeat to Liverpool in the Carabao Cup semi-final.

The Gunners registered a hard-fought 0-0 draw in the first leg on the road, but they could not carry the momentum. The Reds progressed to the final with a 2-0 win last night.

Tomiyasu made his first appearance since New Year’s Day after overcoming a tight groin. He was far from his best, losing possession on 18 occasions over the course of the game.

One of those moments contributed to the opening goal. The Japan international slipped in the lead-up to Diogo Jota’s scuffed effort which found its way beyond Aaron Ramsdale.

Tomiyasu has built his reputation on his ability to win regular duels, but he was far from efficient last night. He managed to succeed with just eight of his 16 duels against the Reds.

Following the game, Arteta came to the defence of the 23-year-old, citing that the club had no choice but to play him with Cedric Soares and Calum Chambers sidelined.

The Spanish tactician was delighted with the effort from the right-back, who was called up to play 90 minutes yesterday without a single training session following his injury.

He told Arsenal.com: “Well, he’s done incredibly. We didn’t want to play him, we had to push him because Cedric and Callum were out and we didn’t have any full backs.”

“The moment that he knew that he said that he would play. He didn’t have any training sessions with us, and still was willing to play and compete the way he has done today.”

Tomiyasu has been a revelation for the club since his summer arrival from Bologna. He has been ever-present in the league, and should start against Burnley on Sunday.

His strong displays have made him a firm favourite among fans. His performance was far from his best yesterday, but it was justifiable with the lack of training.

He was still up for the challenge and played through 90 minutes. Tomiyasu will be keen to redeem himself when the Gunners entertain the Clarets this weekend.

Despite the recent setbacks in the Cup competitions, the club still have a genuine chance of finishing in the top four of the Premier League, which remains the priority.

They are only two points behind fourth-placed West Ham with two games in hand. Meanwhile, Chelsea, who are third, are nine points ahead, having played three games more.

With Chelsea and Manchester United hosting Tottenham Hotspur and West Ham United respectively, the Gunners could end up in the fourth spot heading into the winter break.