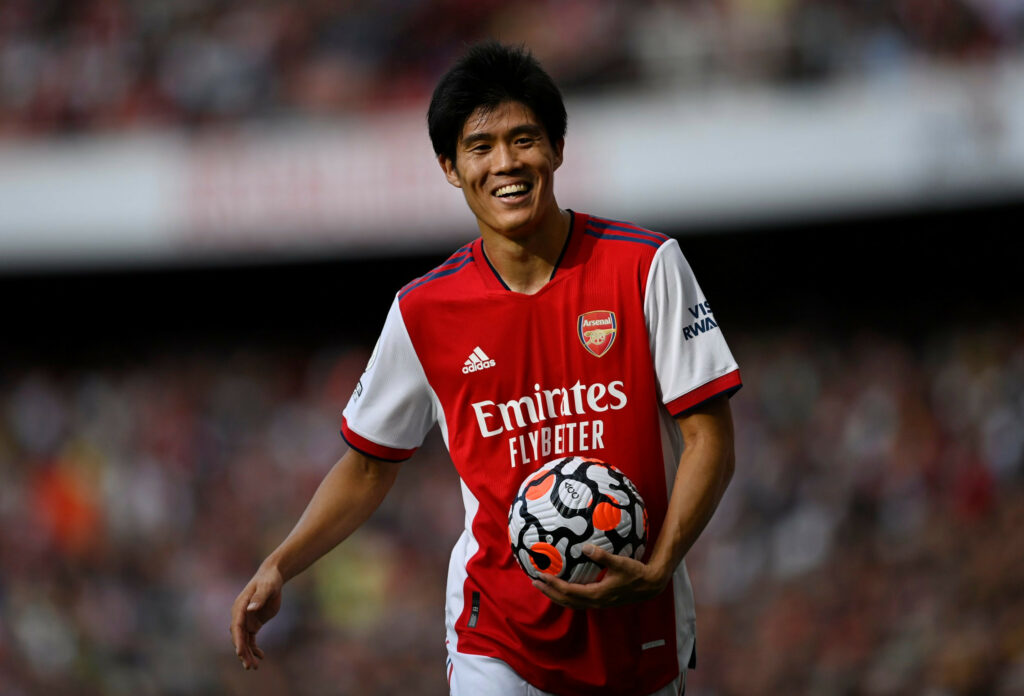 Arsenal manager Mikel Arteta has confirmed that Takehiro Tomiyasu could be out for a few weeks after suffering a recurrence of a calf problem against Liverpool.

The Japan international was rushed back to action for the second leg of the Carabao Cup semi-final after Cedric Soares and Calum Chambers were ruled out with injuries.

Tomiyasu completed the full 90 minutes of the 2-0 loss at the Emirates Stadium, but his performance was far from convincing as he struggled to win his ground duels.

Following the game, Arteta came to the defence of the Tomiyasu saying that he did not want to play him in the first place, and it now appears he has suffered a fresh injury.

The 23-year-old was not part of the matchday squad for the goalless Premier League draw against Burnley yesterday. Following the game, Arteta confirmed Tomiyasu’s setback.

He told Arsenal.com: “Well, Tomiyasu had an injury and we didn’t have anybody to play in that position against Liverpool.”

“He really wanted to push, he tried and he played the 90 minutes, and he felt it again. So he will be out for a couple of weeks.”

Tomiyasu was initially part of the Japan squad for their upcoming World Cup qualifiers, but it was confirmed yesterday that he has been withdrawn.

While the setback is a blow for the Gunners, the defender has sufficient time to recover. The Gunners won’t be playing again until the second week of February.

The club have as many as four games to be rescheduled, but each of those teams are set to play in the FA Cup fourth round, thus offering another week’s rest.

Arteta will take his team to Dubai for the winter/international break. It is unclear whether Tomiyasu will be involved. He may stay in London to recover.

The club have had a dismal beginning to the year, and they have not scored in the last four games which has contributed to disappointing Cup exits.

Despite this, they are only two points behind fourth-placed Manchester United, having played a game less. They have their Champions League destiny in their hands.

The onus will be on improving on the offensive side of the game after the break. It is quite clear that the Gunners need an upgrade on Alexandre Lacazette.

It remains to be seen whether they can pursue their priority target in Fiorentina’s Dusan Vlahovic before the transfer window slams shut on January 31.