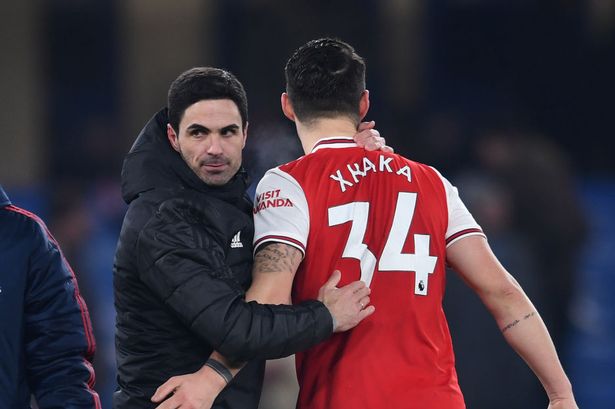 Arsenal manager Mikel Arteta has said that the club are aiming to get more out of Granit Xhaka this term after his goal and assist against Leicester City on Saturday.

The north London giants continued their bright start to the new Premier League campaign with a 4-2 win over the Foxes. They could have quite easily doubled their tally with the chances at hand.

Gabriel Jesus undoubtedly stole the headlines with a stunning two goals and two assists on his home debut, but Xhaka and Gabriel Martinelli were also involved with a goal and an assist apiece.

Towards the end of last season, we saw Xhaka make occasional forward runs for the Gunners, and it was with a greater frequency yesterday where he could have bagged a hat-trick on another day.

He was nearly put through on goal by Thomas Partey’s long-range pass, but didn’t have the pace to get behind the final defender. Xhaka also attempted a header at the far post, hitting the woodwork.

The Swiss eventually made a difference with the assist for Jesus’ stunning curling strike to open the scoring. In the second half, Jesus turned provider as Xhaka scored with a simple tap-in.

Following the game, Arteta acknowledged that there has been a construed effort from the club to get more players involved in the penalty box in order to score more goals this campaign.

The Spanish tactician added to explain Xhaka’s importance in the squad. While he has fared well in his deep lying role, Arteta believes he has the ability to operate as a box-to-box midfielder.

“That’s what we need. If you want to be at the top then we’re going to have to score a lot of goals and we cannot rely on two or three players.”

“He’s there to play the role that we want and Granit has certain characteristics, but we can develop other characteristics because he has ability to do it.”

The £18 million-rated star previously divided opinion among fans after his unsavoury Crystal Palace incident in 2019, but has since redeemed himself.

He has been one of the club’s leading performers for some time and yesterday, he was in the thick of things, linking up splendidly in and around the box.

Xhaka may not have the same freedom against the likes of Manchester City, but he looks to be playing to the best of his abilities at the current point of time.

The only drawback is his occasional tendency to lose possession higher up. It nearly cost the Gunners a goal early on, but Wesley Fofana failed to capitalise.